Whenever we take down a log cabin, it seems that the walls are covered in newspapers. It was some sort of insulation to keep the winds out. I’m not sure if it was viewed as primitive wallpaper, or if it was strictly functional. We are currently taking down a log cabin near Lanesboro, Minnesota. The barn was built in the mid-1800s and was disassembled and moved down the bluff in 1897. The place has Norwegian ancestry. The newspapers dated from 1897 to about 1909. Most of the pages were from the Skandinaven. The Skandinaven was the local (Chicago, St. Paul, and Minneapolis) Scandinavian (Norwegian, Swedish, Danish) newspaper. Apparently the three languages are very similar. So similar, that a common language could be used.

We managed to save a number of advertisements and article parts from the newspapers. I selected 5 here as a snapshot into the times. Although I think we may have to follow-up with another 5 images later.

The first image is an ad from White Star Lines, which was the owner of the Titanic. The Germanic and Britannic were steam ships fitted with sails that were in service from about 1875 to 1903. It took about 8 days to cross the Atlantic in these ships. The Teutonic was launched in 1889 and served until 1921. The Majestic, launched in 1890, is an interesting ship because it was to be replaced by the Titanic. After that fateful voyage, the Majestic was re-commissioned into service and remained so until 1914.

The second image is from Grain Belt Brewing. It is a very early image as Grain Belt was founded in Minneapolis in 1890. In the day, the beer was transported in kegs and glass bottles by horse and wagon. The advertisement roughly translates to, “Ladies and Gentleman, I will now produce something (magical? wonderful?) from this bottle. Uh! It is Grain Belt DI, one of the brews from ??” These newspapers are a little tricky to translate because not only is the language different, but the typography is different as well. For example, the letter s looks like the letter f in this old font.

A third image has the Dutch Boy Paint logo, with the name National Lead Company. The National Lead Company was one of the 12 original stocks included in the Dow Jones Industrial average in 1896, although they began business back in 1772 in Philadelphia. While they produced a wide range of products, they indeed produced lead and titanium based paint — which later covered the white barns and houses for decades to come. As far as I can tell, the Dutch Boy name was not used until 1907.

The fourth image is a classic Sears, Roebuck, and Co advertisement for a sewing machine. While I think we’ve all see the range of products that Sears and Roebuck supplied, what struck me is that the advertisement was translated in Scandinavian. We act a bit like multi-lingual translations are a modern issue, but they’ve always been around. (the Skandinaven newspaper company apparently offered this service). Sears was founded in 1886, but in just 10 years, they were producing a 536-page catalog.

Finally, we have an advertisement for Stationary and Portable Engines from the Thompson and Sons, Manufacturing Company in Beloit Wisconsin. It is a variation of the Lewis Gas Engine that was a prize winner in the 1893 Chicago Worlds Fair. These types of engines supplied the power for line-shaft equipment that ran the factories and sawmills of the day. From what I can tell, Thompson and Sons only manufactured the machines from 1893 to 1906.

Kevin has owned and operated Antique Woodworks since 2004. He works works both behind the computer screen and phone as well as hands-on selecting, cutting, and sanding this old wood. He's also the guy who does the drawing and designing of our final products. Finally, he brings a passion for history, beauty, and authenticity in all that's done at Antique Woodworks. Prior to starting Antique Woodworks, Kevin worked in the computer science and marketing fields. In consultant roles, he worked on major websites including Half.com (an eBay subsidary), Childrens Place, 3M, Lab Safety and others. He was one of the early pioneers developing websites as far back as 1996. I had a customer from Texas call the other day and asked for a reclaimed wood conference room table with a nautical theme.  I chuckle 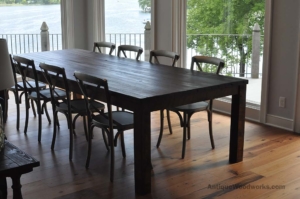 While this table is perhaps not as dramatic as many of the tables that we’ve done in the past, it does, nonetheless have some wonderful It is pretty amazing to see some of these old barn beams become fireplace mantels. We start out with gray, sometimes rotting beams from the 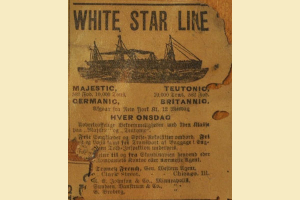 Whenever we take down a log cabin, it seems that the walls are covered in newspapers. It was some sort of insulation to keep the This is an incredible little gem of a fireplace mantel. On very rare occasion, we find cherry wood pieces in a barn. This was one